Through a summer course in Tulum, Mexico, USC students learn yoga and mindfulness. It’s part of a new minor aimed at helping students take control of their health.

Students in the Maymester course took a yoga class each morning and afternoon, then spent the evening meditating. (Photo: Courtesy Isabelle Pilliere Mazumdar)

Some 800 years ago, the Maya worshipped the god of honey in the sacred town of Tulum, Mexico. Murals of Ah-Muzen-Cab, who resembles a stingless bee diving to Earth and is known as the “descending god,” still remain on the walls of a temple there.

Worship of Ah-Muzen-Cab may have dwindled over the last few centuries, but Tulum’s importance as a site of spiritual practice remains. Thousands of people now visit the area annually to attend yoga and meditation retreats.

If practicing 5,000-year-old Indian traditions in Mexico seems a little unusual, yoga teacher Isabelle Pilliere Mazumdar says the draw for modern visitors is likely the same reason the ancient Mayans built Tulum where they did, on the Yucatán Peninsula.

“It’s the special energy of the area,” says Mazumdar, a senior lecturer in the physical education and mind-body health department at the USC Dornsife College of Letters, Arts and Sciences. “We don’t have this belief in Western society, but a lot of cultures believe in the importance of energy, whether it’s Chinese, Japanese or the Mayan culture.”

Mazumdar recently led a small group of USC students on a week-long Maymester trip to Tulum, where they took yoga lessons, meditated and explored the region’s history. It’s an elective course for the newly launched Mind-Body Studies Minor, which trains students in the fundamentals of good health, from sleep to mindfulness to physical exercise. With rising levels of anxiety and depression, as well as high obesity rates among college students, it’s timely and important coursework. 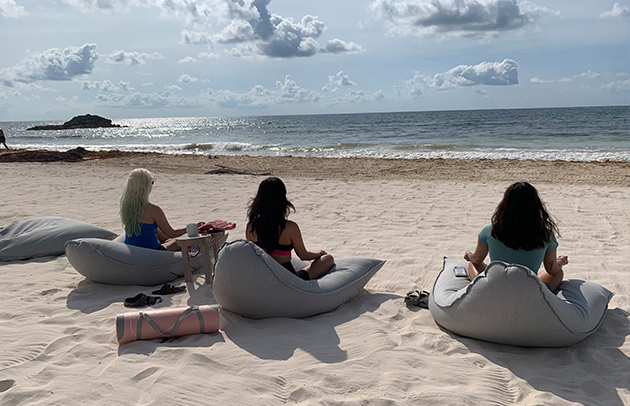 A yoga retreat in Mexico might just sound like a relaxing vacation, but Mazumdar’s Maymester course had a packed schedule. Each day, students took two yoga classes, participated in group discussions and settled down for evening meditation. They also made time for excursions, exploring the ruins of the Mayan civilization and the spectacular caves in Gran Cenote.

The students ranged from novices to budding yoga enthusiasts. They ate all of their meals together and practiced yoga side-by side morning and evening, so the trip was also an exercise in living closely among people with different backgrounds and beliefs. “I had a very diverse group, different ethnicities, religions, sexual orientations. It was really nice that they all got along because you’re pretty much together 24/7,” says Mazumdar.

The new Mind-Body Studies minor, which launches this fall, also includes courses on human anatomy, nutrition and the brain as well as other electives like swimming and hiking. More than 20 students have already enrolled in the minor, which was designed to meet the demand from students for more tools to manage their stress and health.

The minor also helps students who are planning a career in medicine learn techniques for helping people that don’t involve prescriptions or surgery; a growing trend in health care.

For Christina Maineri, who is majoring in neuroscience and cognitive science, the new minor connects directly with her career interests. “I hope to use what I learn from the Mind-Body Studies minor, particularly in regard to how we train our brain, to assist dementia patients,” says Maineri.

Mazumdar could be the poster woman for how yoga can be a lifelong, fulfilling practice. She first encountered it some 40 years ago, when she was vacationing at a resort hotel in the late 1970s, when yoga wasn’t yet a mainstay in gyms. “Yoga was a little bit out there, it was experimental,” she says. As a dancer, she was attracted to the way it stretched and lengthened the body, and she’s been practicing the sport ever since.

Students from the Maymester course such as Anya Khurana, who is pursuing a degree in public health education and promotion at the Keck School of Medicine of USC, are planning a similar trajectory.

“The practices of yoga and mindfulness are great tools for stress management and overall wellness, but this course taught me how to apply those skills to my own life, which I will take with me as I attend professional school and begin my career,” says Khurana.

One Flaw of Mindfulness Meditation