After being rescheduled from 2021, Ben Platt made his Nashville debut with his second studio album, “Reverie.” 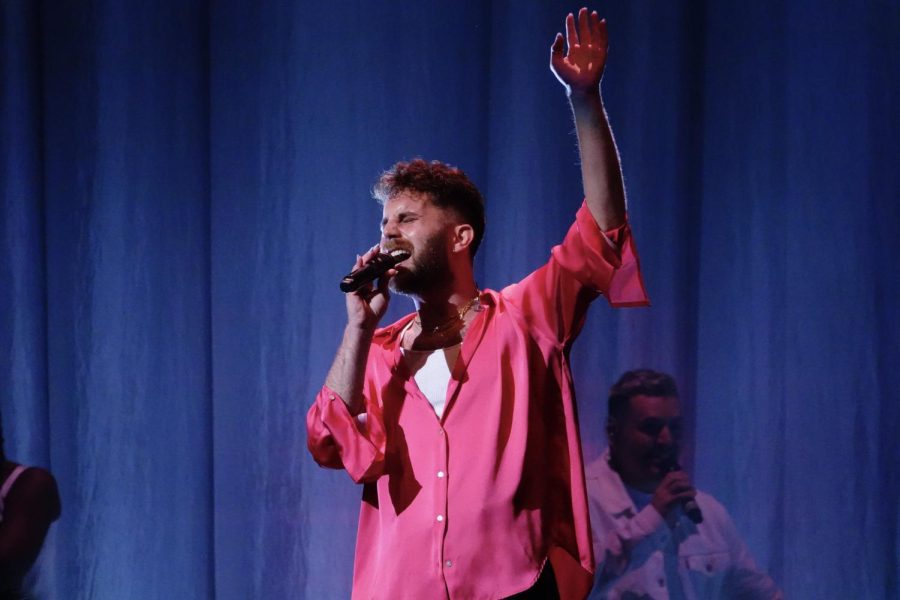 Ben Platt, singing to the audience at Bridgestone Arena, as photographed on Sept. 18, 2022. (Hustler Multimedia/Jaylan Sims)

I have loved Ben Platt since the first time I watched “Pitch Perfect.” His portrayal of Benji, the awkward roommate of the much cooler Jesse (Skylar Astin), won me over after singing “Magic” in the film’s final scene. I also fell in love with “The Politician,” where Platt portrays “Peyton”–a high-strung high school student running for class president. Finally, his debut studio album “Sing to Me Instead” basically carried me through 2020 when the pandemic separated everyone from their loved ones.

The Reverie Tour was the first concert I’ve been to since 2019, when I saw Mumford and Sons in Columbus, Ohio. Walking into Bridgestone Arena, I had no idea what to expect. Will we be standing for the whole concert? Are these shoes appropriate for dancing to the songs?

The opening act was Aly &AJ, a duo of sisters who my own sister reminded me starred in the iconic “Cow Belles” Disney channel original movie. I was not very familiar with their music but instantly recognized their closing number–“Potential Breakup Song.” Released in 2007, the track gained traction from a TikTok trend where moms of college girls posted clips of themselves lip-syncing along to it. Platt later brought the sisters back out towards the end of the night to perform a cover of “Go Your Own Way” by Fleetwood Mac. It was not a song I was expecting him to play, but definitely fit the theme of the night: letting go and finding beauty in every new situation.

Throughout the two-hour set, I kept thinking “alright, this is definitely my favorite song of the night,” however I decided that “dance with you” is my favorite in “Reverie.” The song title perfectly encapsulates what happens when his voice effortlessly moves with the melody: I wanted to dance along. Looking around, you could see groups of people jumping around and dancing about as Platt brought the techno-nature of the song to real life.

Serving as bookends for both the album and the concert, “king of the world” is broken up into three parts. The three-part series represents the cycle of our lives. “Part one” sings about newness and the excitement of youth. “Part two” tells of a new love but also how it can change overnight. Lastly, “Part three” represents the ending of life and relationships and abandoning our hardships when it becomes too much. Each time a part of “king of the world” was sung, the singer performed in the dark. This song series is quite mysterious and interpretive, so I appreciated the creative choice of singing them in the dark.

What I loved most about the concert was how it felt like I was catching up with an old friend. Every few songs, Platt would stop and chat with the audience about the backstory of the songs and also little details about the night. He showed us his bedazzled water cup, his sparkly blue nails and told a story about being away from his boyfriend, Noah Galvin. Without even being in the front row, it truly felt like he was talking one-on-one with me.

After originating the role of Evan Hansen in “Dear Evan Hansen” (DEH) on Broadway, he portrayed the character on and off for several years. The night of the concert just happened to fall on the closing night of DEH on Broadway, adding to the emotional nature of the performance. Platt announced that, for the first and last time, he would be performing “Waving Through a Window.” Screams erupted throughout the arena (including from myself), and Broadway fans sang their hearts out to every word.

Surprises just kept coming when Platt announced he would be performing a brand new song called “Monsters.” He explained that this song was inspired by the pressures teenagers face to grow up quickly and not having room to make mistakes. You could hear a pin drop as audience members were carefully listening to each word. As a stressed college student in my last week of being a teenager, I felt a breath of fresh air and it seemed like he was singing for me and anyone else who resonated with the melody.

As if there were any dry eyes left in the house after “Monsters,” he brought the house down and the tissues out with a cover of “Yoü and I” by Lady Gaga and “Grow as We Go” from his first album. These two songs gave me the deepest feelings of nostalgia. “Yoü and I” was released when I was nine years old, and it reminds me of singing along to the radio in my mom’s car (as if a nine-year-old girl truly relates to any of the concepts in that song). On the other hand, “Grow as We Go” is quite possibly my favorite song of all time. I have vivid memories of sitting in my car in the spring of 2020 and blasting this song. The lyrics “We’re gonna see that it was better / That we grew up together” really resonated with me as I was coping with the fact I would never be in the same school as all my friends again. My heart was full and my face full of tears.

He closed the night with “imagine,” an upbeat song that describes someone being your hero and not imagining life without them. I looked around to get one last look at the scene and saw several happy couples embracing each other, embracing the magic in the air. The stage was lit up with rainbow lights and I can only describe the last few moments in Bridgestone as happy.

I left that night with a smile on my face. When I returned to campus later, I literally skipped back to my dorm all while still singing the songs I heard earlier. “The Reverie Tour” was a perfect first concert in Nashville and I can’t wait to “come back” to Bridgestone again and again.

Team members of RNR Tire Express were honored at the 2022 Rent-to-Own (RTO) Hall of Honor Inductees ceremony at the...

As the sun peaked over the larger-than-life Southern California mountains, eight off-road vehicles followed one after the other through mud,...